There are more than 80 types of autoimmune diseases, and some have similar symptoms. This makes it hard for your health care provider to know if you really have one of these diseases, and if so, which one. Getting a diagnosis can be frustrating and stressful. Often, the first symptoms are fatigue, muscle aches and a low fever. The classic sign of an autoimmune disease is inflammation, which can cause redness, heat, pain and swelling.

The diseases may also have flare-ups, when they get worse, and remissions, when symptoms get better or disappear. Treatment depends on the disease, but in most cases one important goal is to reduce inflammation. Sometimes doctors prescribe corticosteroids or other drugs that reduce your immune response.

A person may have more than one autoimmune disorder at the same time.

Celiac disease is a condition caused by damage to the lining of the small intestine. This damage comes from a reaction to eating gluten. This is a substance that is found in wheat, rye, barley, and possibly oats. It is also found in food made from these ingredients.

When people with celiac disease eat foods with gluten, their immune system reacts by damaging the villi. Because of the damage, the villi are unable to properly absorb iron, vitamins, and other nutrients. This may cause a number of symptoms and other health problems.

People with celiac disease are more likely to have: 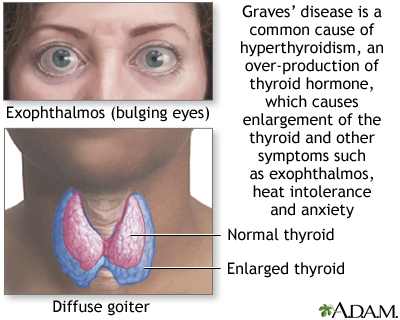 Chronic thyroiditis is caused by a reaction of the immune system against the thyroid gland. It often results in reduced thyroid function (hypothyroidism).

The thyroid gland is located in the neck, just above where your collarbones meet in the middle.

Hashimoto disease is a common thyroid gland disorder. It can occur at any age, but is most often seen in middle-aged women. It is caused by a reaction of the immune system against the thyroid gland.

The disease begins slowly. It may take months or even years for the condition to be detected and for thyroid hormone levels to become lower than normal. Hashimoto disease is most common in people with a family history of thyroid disease.

Rheumatoid arthritis (RA) is a disease that leads to inflammation of the joints and surrounding tissues. It is a long-term disease. It can also affect other organs.

The cause of RA is not known. It is an autoimmune disease. This means the immune system of the body mistakenly attacks healthy tissue.

Symptoms will vary, based on the type and location of the faulty immune response. Common symptoms include:

Tests that may be done to diagnose an autoimmune disorder include:

Treatments will depend on your disease and symptoms. Types of treatments include:

Many people take medicines to reduce the immune system’s abnormal response. These are often called immunosuppressive medicines. Examples include corticosteroids (such as prednisone) and nonsteroid drugs such as azathioprine, cyclophosphamide, mycophenolate, sirolimus, or tacrolimus. Targeted drugs such as tumor necrosis factor (TNF) blockers and Interleukin inhibitors can be used for some diseases.